From Heraldry of the World
Your site history : Dietlikon
Jump to navigation Jump to search 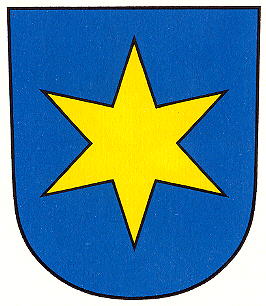 The arms were officially adopted on December 12, 1931.

The oldest use of a star for Dietlikon dates from a wax seal on a document from 1552. The star also appeared on a baptismal font in the local church from 1698. The first coloured images date from 1719 in a roll of arms of the Deans of Regensberg, and 1743 in a parish book. In both cases the star is golden on a blue field.

In the 1920s the cantonal college of arms proposed to the village to use the oldest known colours, which was finally adopted by the council in 1931.The meaning of the star and the colours are unknown; there is no known relation with any ruling family in the village.