From Heraldry of the World
Your site history : Diocese of Camden
Jump to navigation Jump to search 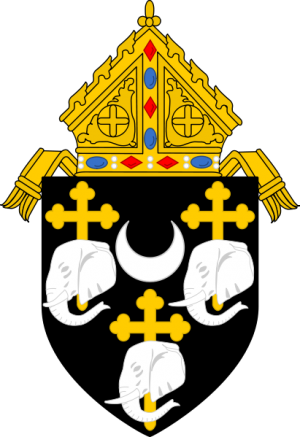 The black field with the three silver elephants heads is derived from the arms of Charles Pratt, first Earl of Camden and Lord Chacellor of England, and after whom the See of Camden is named. In 1773, Jacob Cooper, a descendant of William Cooper, laid out a town and named it for Lord Camden in commemoration of his friend, as a strong defender of the American colonial rights.

The golden crosses accompany the elephants heads, in honor of the Blessed Trinity and it affords a ´difference´to make the shield peculiar to the diocese of Camden. Above the elephants heads is a silver crescent to honor the Blessed Virgin Mary in her title of the Immaculate Conception, titular of the Cathedral Church in Camden.