From Heraldry of the World
Your site history : Diocese of Olympia, Washington
Jump to navigation Jump to search

Country : United States
Denomination : Anglican
Established : 1910 and the name alludes to the Region called "Olympia" and not to the City and Capital of Washington
See city : Seattle 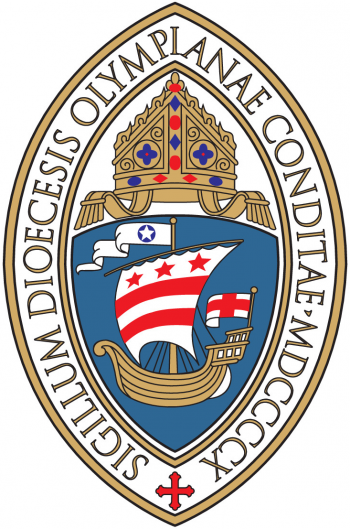 Azure, a lymphad argent, sail unfurled argent, two bars below three mullets gules, from the masthead a pennant argent, atorteaux charged with a mullet and from the stern a banner argent, a cross gules.

Designed bu Pierre de Chaignon LaRose and adopted in 1913 by the third annual convention of the Diocese. The Boat symbolizes the Church, and also commemorates Captain Robert Gray, who discovered the Colombia River in 1792. The Sail shows the Arms of George Washington and in the stern is the Flag of St George for the Anglican heritage. The Pennant with the star is for the USA.