From Heraldry of the World
Your site history : Diocese of Pueblo
Jump to navigation Jump to search 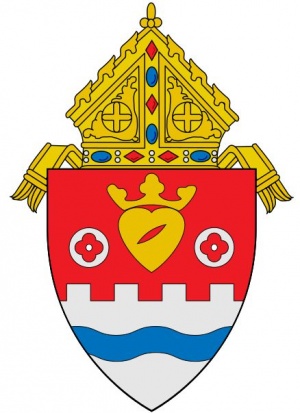 The wavy bar represents the Arkansas River, where Pueblo is situated at the mouth of Fountain Creek on both banks of the river. The embattled red chief expresses the meaning of Pueblo - a village built of stone or adobe. In medieval times most towns were fortified so that embattlements in heraldry were often used with this significance.

The red and gold are the colors of old Spain, the country which gave missionaries who accompanied the Conquistadores on the advent in America. Their far flung Christian labors, particular in those counties of Colorado embraced by the Diocese of Pueblo, warrant the inclusion of these tinctures.

The crown and wounded heart in the chief represents the titular of the Cathedral. The Sacred Heart of Jesus, while the two roses honor St Therese of the child Jesus as Patroness of the Diocese. Red is appropriate for the background of these symbols, because it is the liturgical color for the humanity of 'out Lord, and for Charity expressed heroically in the life of St. Therese of Lisieux. The roses also designate Our Lady under her title of "Mystical Rose, and beg her patronage as Patroness of the United States. The roses record further the fact that the fist Bishop of Pueblo, Joseph Clement Willing was called to the See from the Church of the Immaculate Conception, Butte Montana, which is the shrine to Our Lady OF Victory and to St Therese of Lisieux.