From Heraldry of the World
Your site history : Diocese of San Diego, California
Jump to navigation Jump to search 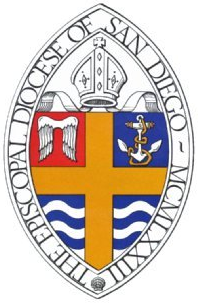 Azure, abase wavy argent and azure, overall a cross argent between in 2nd an anchor or; the first quarter gules charged with a double lure or.