From Heraldry of the World
Your site history : Diocese of Wilmington
Jump to navigation Jump to search 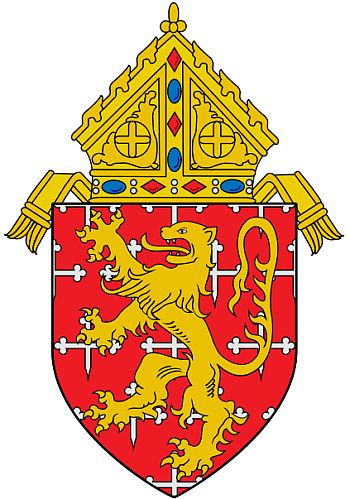 The diocesan arms are based on those of the old barony of Delaware and of Pope Pius IX who erected the See of Wilmington. The Delaware arms are composed of a red field with silver "crosses crosslet fitchy," either in "orle," or sometimes strewn over the field, and a silver lion rampant. The arms of Pope Pius IX display a blue field bearing a gold lion on a like-tinctured ball. Thus, both coats have a lion in common, but for the diocese the lion is tinctured in gold to honor the Pontiff. The field of red, strewn with silver crosses has been retained for Delaware, albeit the crosses for "difference" are "botonny fitchy" (three round knobs on the three upper extremities and a pointed base).

Arms of Coadjutor and Auxiliary Bishops