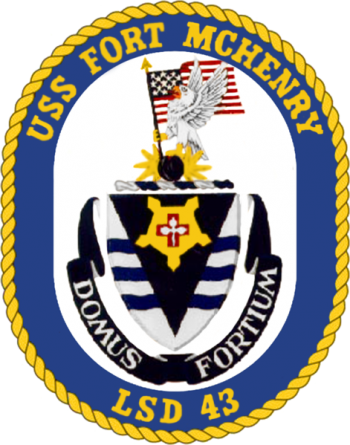 The waves symbolises Chesapeake Bay. The pile suggest the Whetstone Peninsula between Baltimore harbour and the mouth of Patapsco River the location of Fort McHenry, indicated by the fort. The trefoil symbolises the Irish roots of James McHenry, Secratary of War under President Adams, and the namesake of the Fort. The Red Cross symbolises the use of the Fort as a Hospital during World War One. The Flag symbolises the Flag over Fort Mchenry that inspired Francis Scott Key's "Star Spangled Banner". The bomb stand for the bombardment of the Fort by the British Fleet in 1814. The Eagle holding the Us Flag over the bomb indicates the Fort's succesful defense against the British. the Motto Domus fortium is the latin rendering for Home of the Brave.