From Heraldry of the World
Your site history : Doncaster
Jump to navigation Jump to search 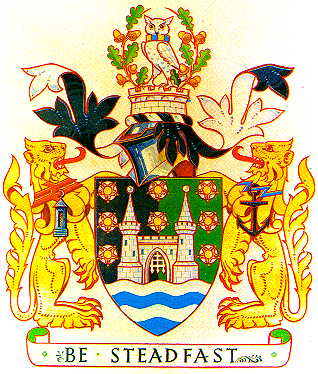 Arms : Per pale Sable and Vert issuant from barry wavy of four in base Argent and Azure a Port between two Towers each with a conical cap ensigned by a ball the Portcullis raised between eight Roses three three and two Argent barbed and seeded proper.
Crest : On a Wreath of the Colours upon the Battlements of a Tower an Owl Argent gorged with a collar company Or and Azure between two Branches of Oak issuant each having four leaves and fructed of four Acorns proper.
Supporters : On either side a Lion sejant Or that on the dexter gorged with a representation of the device of British Rail Gules pendent therefrom a Miner's Safety Lamp proper that on the sinister gorged with a Flash of Lightning Azure pendent therefrom by the ring an Anchor Sable.
Motto: 'BE STEADFAST'

The arms were officially granted on September 1, 1975.

The shield is half black and half green to represent the union of industrial and rural areas in the borough. The castle comes from the old Doncaster arms. Around are placed eight white roses, symbol of Yorkshire for eight Yorkshire councils combined.

The ermine cushion in the crest was found in the old Doncaster arms. The owl is a symbol of wisdom. On either side is an oak branch one for each rural district combined in the new borough.

The sitting lions were used as supporters in the old Doncaster arms. Each has a distinctive collar. The dexter lion has a collar forming a version of the British Rail logo. This shows the importance of Doncaster as a railway town. From the collar hangs a miner's lamp, for coal mining. The sinister lion has a lightning flash for a collar, symbolic of electricity generation. From this hangs an anchor for shipping. 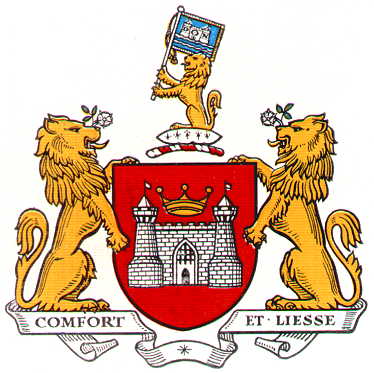 Arms : Gules a Port between two Towers with Flags Argent the Portcullis raised Sable in chief a Saxon Crown Or.
Crest : On a Wreath of the Colours upon a Cushion Ermine a Lion sejant Or grasping between his paws a Staff proper flying therefrom a Banner Azure fringed and tasselled Gold thereon upon Waves Argent ans Azure a Port between two Towers as in the Arms charged with the word DON in letters Sable.
Supporters : On either side a Lion sejant Or holding in the mouth a Rose Argent barbed seeded leaved and slipped proper.
Motto: 'COMFORT ET LIESSE' - Comfort and joy

The shield and crest had long been in use, though not usually together until recent times. The lion and banner device appears as a badge (without torse) on Edward IV's charter dated 30th October, 1467, and the motto also occurs thereon. This proves a much earlier use of a town's motto by Doncaster than is common with boroughs. The castle upon a shield appears on old mayoral seals and also upon a charter dated 13th May 1532, but seems not to have been adopted as the borough arms before the 19th century.

A corporate common seal adopted in May, 1712, includes only the lion and banner — not upon a cushion tinctured ermine as now. The ermine cushion appears to be a fairly modern misrepresentation of the green mount shown on the 1467 charter.

Above the castle was formerly placed the royal crown, but this could not be officially allowed and it was replaced by a Saxon crown which has reference to the lordship of the Manor of Hexthorpe (of which Doncaster formed part).

The banner visually represents the name and the white roses refer to Yorkshire.