From Heraldry of the World
Your site history : Doncaster RDC
Jump to navigation Jump to search 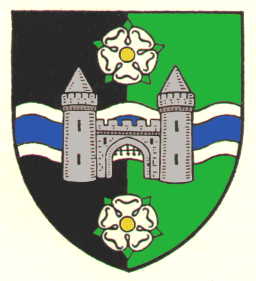 Per pale Sable and Vert a Fesse wavy Argent charge with another wavy Azure and surmounted by a Port between two Towers the portcullis raised proper in chief and in base a Rose of the third barbed and seeded also proper.

The black and green background represents the district's two main industries - coal mining in the west and agriculture in the east. The white and blue waves symbolise the River Don and the castle gateway is derived from the arms of the County Borough of Doncaster, together they express the name. The white roses of course refer to the district's location in Yorkshire.