From Heraldry of the World
Your site history : Dorking and Horley
Jump to navigation Jump to search 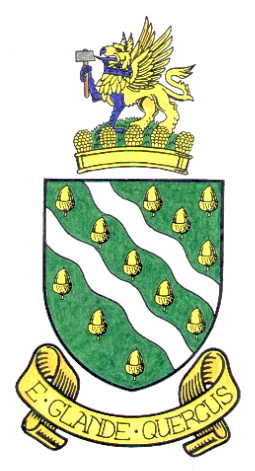 Arms : Vert semée of [twelve] Acorns Or two Bendlets wavy Argent.
Crest : Out of a Coronet composed of eight Pine Cones set upon a Rim Or a Mount Vert thereon a Griffin passant Gold the beak and forelegs Azure and ducally gorged of the last holding in the dexter claw a Hammer erect proper.
Motto: 'E GLANDE QUERCUS' - From the acorn, the oak

The shield is an heraldic map of the district, with the green background symbolizing the countryside of Surrey and twelve gold acorns, from the arms and badge of the County Council. They represent the twelve parishes of the district, and are set in positions relative to their location between and around the River Mole and Tillingbourne Stream, represented by the two white waves.

The colours of the wreath and mantling are green, doubled with white shaded grey, giving reference to the greensand, chalk and wealden clay of the area. The distinctive coronet of gold pine cones refers to the weald, Leith Hill woodland and the health-giving properties of the district.

The grassy mound within the coronet alludes to the local hills, and on this stands the griffin crest of one of the principal local families, Evelyn of Wotton, to which belonged the famous diarist. He holds a hammer for the ancient wealden ironstone industry.

The motto "E glande quercus" ("from the acorn, the oak") is appropriate to the design of the arms and symbolizes steady progress to great strength.

Literature : Image and information send to me by mail