From Heraldry of the World
Your site history : Dornoch
Jump to navigation Jump to search 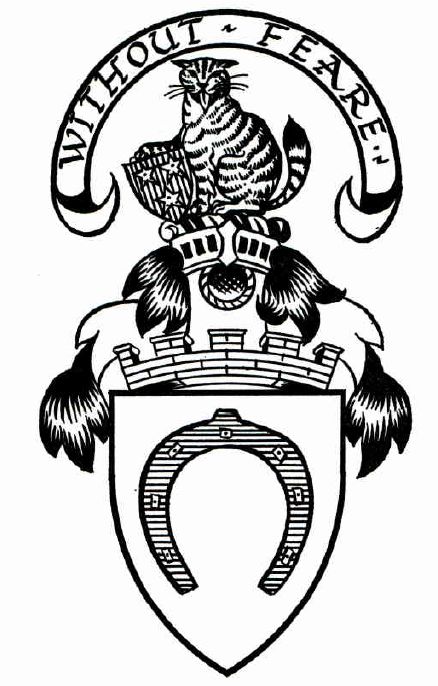 Argent, a horseshoe Azure, having seven horsenails Or.

Above the Shield is placed a mural crown masoned Proper, thereon a Helmet befitting their degree with a Mantling Azure doubled Argent, and on a Wreath of their Liveries is set for Crest a cat-a-nrountain sejant Proper, holding in his dexter paw an escutcheon Gules charged with three mullets Or, and in an Escrol over the same this Motto "Without Feare".

Dornoch was originally a Burgh of the Bishop of Caithness. In 1628, it was created a Royal Burgh by King Charles I, but with some reservation of rights to the Earl of Sutherland, the hereditary Superior.

The arms are based on an old Burgh seal known since 1786. The silver and blue colours are those traditionally used by the town and the horseshoe recalls the victory of William, Thane or Earl of Sutherland, over the Danes and Norwegians at nearby Embo in about 1259. As the legend tells, in this battle, the Thane is said to have slain the Danish General with a horse's leg he had picked up on the battlefield, and in honour of his triumph, the place was given the name Dorneich, being the Gaelic for a horse's foot or hoof. The name, however, is older as 1259.

The motto is an English version of the French motto "Sans Peur" of the Earls of Sutherland. 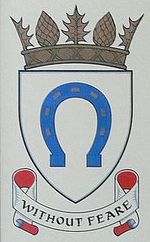 Argent, a horseshoe Azure, having seven horsenails Or.

Above the Shield is placed a Coronet appropriate to a statutory Community Council, videlicet:- a circlet richly chased from which are issuant four thistle leaves (one and two halves visible) and four pine cones (two visible) Or, and in an Escrol under the same this Motto "Without Feare".

These arms are the same as the old Burgh arms with a new crown and no crest.