From Heraldry of the World
Your site history : Dover (England)
Jump to navigation Jump to search 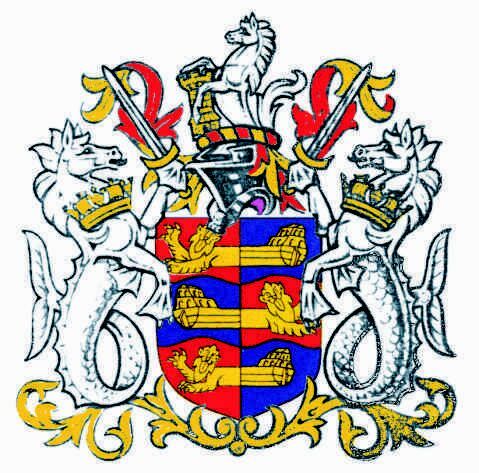 Arms : Per pale Gules and Azure on a Fess wavy counterchanged between two demi-Lions passant guardant each conjoined to the Hulk of a Ship a like Hulk conjoined to a demi-Lion counter passant all Gold.
Crest : On a Wreath Or and Gules a demi Horse Argent supporting a Tower Gold.
Supporters : On either side a Sea Horse Argent gorged with a Naval Crown Or and grasping in the fin of the interior foot a Sword bendwise Argent pommel hilt and quillons Gold.

The District of Dover contains three of the Cinque Ports, Deal, Dover and Sandwich. It is appropriate that the arms should be based on the Cinque Ports shield, divided into three by waves.

The crest has the white horse of Kent, made distinctive by a tower taken from Deal's crest.

The supporters are again the white horse of Kent, made into seahorses and with the distinctive addition of a naval crown and sword to signify the historic importance of Dover to the defence of England.

Dover was already an important harbour city in medieval times, and one of the main cities of the Cinque Ports.
The oldest known seal of Dover dates from around 1180 and shows simply a ship. It was used on a (lost) charter in the archives of the Abbey of St. Omer in France, but a copy of the document and seal was made.

A second seal dates from 1305 and also shows a ship, now in more detail, and with the banner of the Cinque Ports on the stern. The seal indicates that the city is a major harbour.

The reverse of the seal shows the story of St. Martin of Tours, cutting his cloak for a beggar in front of the city gate of Amiens. This was probably taken from the 13th century seal of Dover Priory, which showed the Saint, with in front a small shield with a cross and four leopard's heads. The composition is surrounded by a circle of six lions passant/counter-passant.

The seal has also been recorded by the College of Arms in the Visitations of 1574.

The Borough did not have official arms, but adopted in 1861 a combination of three shields as can be seen below. These are the arms of the Cinque P{orts and the obverse and reverse of the old seal, without the inscriptions and lions. It replaced older arms with a cross and four leopard's heads, which probably were the true arms of Dover Priory, used erroneously by the town.

The new devise with the three shields was designed by the Somerset Herald of the College of Arms.

Until the mergers in 1974 the city still used the old seal or a more modern copy thereof.

On two occasions the arms of Dover Priory were still listed as the arms for Dover city:

Only once the arms of the Cinque Ports or the image of St. Martin were used:

Use in the city:

Dover, Delaware, USA uses a devise based on the arms of Dover: