From Heraldry of the World
Your site history : Driffield
Jump to navigation Jump to search 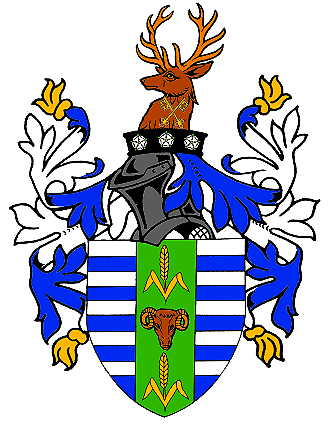 Arms : Barry of ten Argent and Azure a Pale Vert charged with a Ram's Head caboshed proper between in chief and in base an Ear of Barley leafed Or.
Crest : Issuing from a Circlet Sable charged with three Roses Argent barbed and seeded proper a Hart's Head also proper charged on the neck with two Keys in saltire Or; Mantled Azure doubled Argent.

The background of ten white and blue bars are the basis of thearms of the ancient Hotham family of Scorborough Hall, one member of which was responsible for the building of the tower of All Saints' Church, Driffield. The green pale represents the ancient North-South road running through the town and the ram's head and ears of barley indicate the town's history as a great agricultural market centre.

The white roses are from the former East Riding CC arms and the hart's head represents the old Wapentake of Harthill in which Driffield lies. The crossed keys of St. Peter refer to the Liberty of St. Peter's within the Wapentake, also to the chapelry of Little Driffield, dedicated to St. Peter.

The arms are now used by the Town Council.