From Heraldry of the World
Your site history : Droitwich
Jump to navigation Jump to search 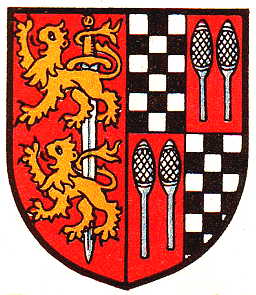 The arms were officially recorded at the Visitation of 1634 and certified by Chester Herald in 1952.

The local tradition concerning the arms has it that in the days of King John, that monarch was fain to sell all his rights here to the burgesses for an annuity, which he disposed of next day to his brother, William of the Long Sword. The town proudly assumed for its coat of arms John's lions impaled on William's sword. Two lions passant were John's arms before he came to the throne. Salt extraction has been important in Droitwich since Roman times and for five centuries the its manufacture of salt was a monopoly guarded jealously. The guild took another coat of arms showing the wicker moulds, know as barrows, and the chequered table for their accounts. The two arms were eventually placed together on one shield.