From Heraldry of the World
Your site history : Droylsden
Jump to navigation Jump to search 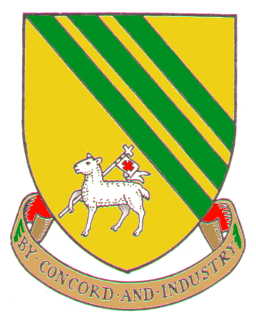 Arms : Or three bendlets enhanced Vert in base a Lamb passant proper supporting a Crossstaff flying a bannerArgent charged with a Cross patée Gules.
Motto: 'BY CONCORD AND INDUSTRY'

The raised bendlets (with the colours changed) are from the arms of the Byron family, Lords of the Manor of Droylsden, who included the famous poet, Lord Byron. Clayton Hall, the early home of the Byron's and its moat still exists along side St Cross Church, Clayton, though now part of Manchester. The Paschal Lamb is the emblem of the Moravian Church, whose settlement was established in Droylsden at Fairfield in 1783.

Originally the society had been established at Dukinfield in 1743, but when the lease expired, 54 acres of land were purchased in Fairfield to build a new settlement, which was significant in the development of the town.