From Heraldry of the World
Your site history : Dukinfield
Jump to navigation Jump to search 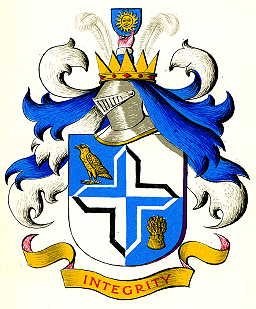 Arms : Quarterly Azure and Argent a Cross pointed and voided quarterly of the last and Sable between in the first quarter a Raven close proper and the fourth a Garb both Or.
Crest : Out of a Crown palisado Or a cubit Arm vested Azure cuff Argent hand proper holding an Escutcheon of the second charged with a Sun in splendour of the first between two Ostrich Feathers of the third.
Motto: 'INTEGRITY'

The arms and crest are based upon the arms of the Dukinfield family. The raven is know locally as a docken is a rebus and the wheatsheaf is from the arms of the Cheshire County.

The palisado crown is a symbol of civic government, an alternative to the more familiar mural crown. The feathers are from the heraldry of the Princes of Wales, Earls of Chester.