From Heraldry of the World
Your site history : Dun Laoghaire-Rathdown
Jump to navigation Jump to search 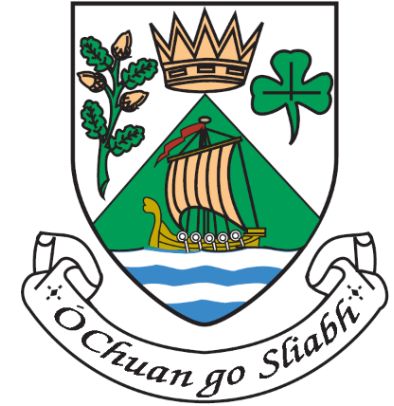 Per chevron argent and vert, in chief an ancient Irish crown proper between in the dexter a slip of oak of the second fructed of the third and in the sinister a trefoil slipped also of the second, in base on waves of four of the first and azure a Viking longship sail set oars in action, also proper. Motto : Ó Chuan go Sliabh.

The new county merged part of County Dublin with the Borough of Dún Laoghaire.

The arms feature a Viking ship. This was found in the crest of the Borough of Dún Laoghaire. The green per chevron division of the shield suggests a green hill and thus the county's hills and mountains. In the base is an heraldic representation of water for the sea and the maritime associations of the area. It also represents the common coastline of the two merged councils. At the top of the shield is an Irish crown from the arms of Dún Laoghaire suggesting King Laoghaire legendary founder of the settlement. The oak branch is for the ancient woodlands that once covered the county and also represents the council's commitment to the environment. The shamrock was found in the seal of the Rathdown No.1 Rural District Council, a former authority in the area.

The motto is translated as "From the harbour to the mountain".