From Heraldry of the World
Your site history : Dunfermline
Jump to navigation Jump to search 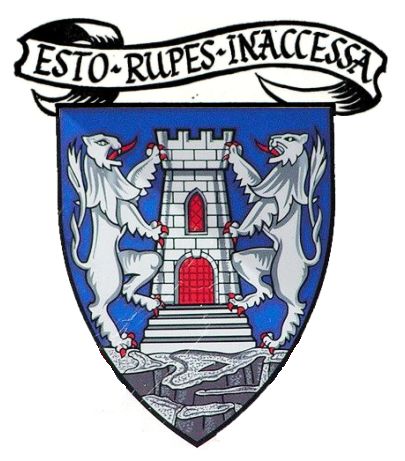 And in an Escrol over the same this Motto "Esto Rupes Inaccessa".

Dunfermline was created a Royal Burgh by King David I between 1124 and 1127. Later it was dependent on the Abbey of Dunfermline and in 1395 was set in feu to the provost, bailies and community. After the Reformation, it was created a Burgh of Regality in favour of George, 6th Earl (and later 1st Marquess) of Huntly, in 1588-89 but five years after­ wards was conveyed in regality to the Queen, Anne of Denmark. From then on, it was regarded as a Royal Burgh.

The arms are clearly based on the old Burgh seal but only eighteenth-century impressions are on record. The tower is Malcolm's Tower, the fortress of King Malcolm III (1057-1093), husband of Queen Margaret; some remains of it can still be seen in Pittencrieff Glen.

The red windows and portcullis denote its Royal owner­ship and the lions supporting it are considered to be Royal lions.

The Latin motto­ "May the rock be inaccessible" appears to recall that Malcolm's Tower was built on a site "strikingly adapted for a stronghold". 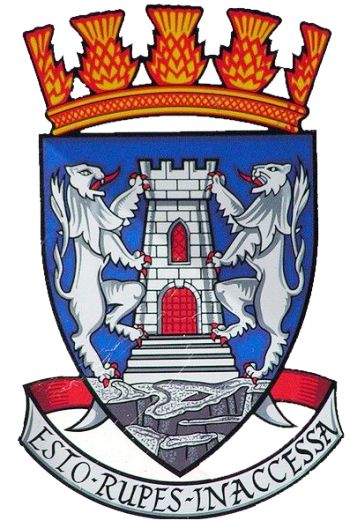 Above the Shield is placed a coronet appropriate to a statutory District, videlicet:-a circlet richly chased, from which are issuant eight thistle-heads (three and two halves visible) Or; and in an Escrol under the Shield this Motto" Esto Rupes lnaccessa ".

These are the Burgh arms with a crown of a district council.