From Heraldry of the World
Your site history : Durham RDC
Jump to navigation Jump to search 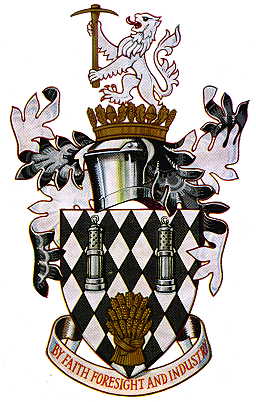 Arms : Lozengy Argent and Sable in chief two Miner's Lamps proper and in base a Garb Or.
Crest : Out of a Coronet composed of four Ears of Wheat and as many Acorns slipped and leaved set alternately on a Rim Or a Lion rampant Argent holding in the forepaws a Miner's Pick erect Or; Mantled Sable doubled Argent.
Motto: 'BY FAITH FORESIGHT AND INDUSTRY'

The arms were officially granted on February 1, 1962.

The black lozenges, like those in the arms of the Durham County Council, together with the miner's lamps and pick, recall that the district was one of the most important coal producing areas in the north-east of England. The wheatsheaf refers to agriculture the districts other main activity.

The gold coronet is one specially created for use by rural district councils and the white lion is from the arms of the County Council and the See of Durham.