From Heraldry of the World
Your site history : Dursley RDC
Jump to navigation Jump to search 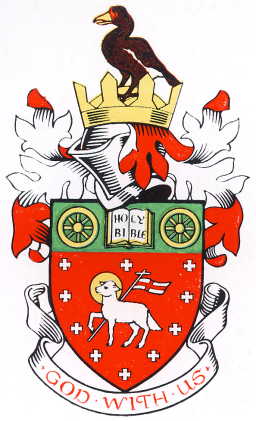 Arms : Gules a Paschal Lamb proper within an Orle of [ten] Crosses formy Argent on a Chief Vert between two Cartwheels of eight spokes Or an open Book also proper garnished Gold thereon the words HOLY BIBLE in letter Sable.
Crest : Out of a Crown vallary Or a Mount of Sand standing thereon a White-fronted Goose close proper.
Motto: 'GOD WITH US'

The Paschal Lamb, an emblem of the wool trade, recalls the former importance of Dursley as a centre of the Gloucestershire wool industry. The crosslets are from the arms of the Berkeley family, Viscounts Dursley. The green chief represents the rural areas and the Bible represents its translator, William Tyndale, who was born in this district. One of the wheels stands for the Lister Engineering Company, and the other for Sir Isaac Pitman, who began teaching his shorthand system at Wotton-under-Edge, taking his basic symbols from the curves and radial lines of an eight-spoked wheel.

The crest represents the Severn Wildfowl Trust, the goose standing within the protective circle of a vallary crown.

The motto refers to Tyndale's work.