From Heraldry of the World
Your site history : East London
Jump to navigation Jump to search 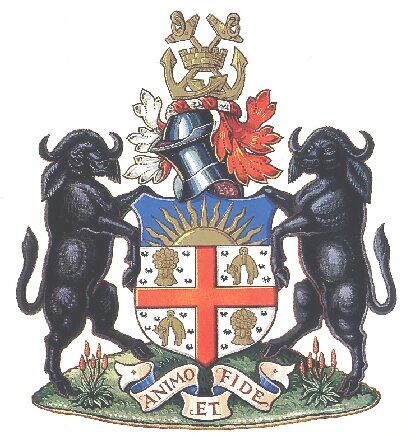 These arms follow closely an earlier device adopted by the Town Council in August 1892 (see image below). 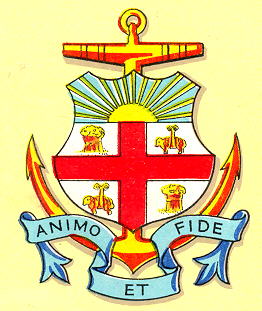 The shield depicts the cross of Saint George, with sheaves and trussed sheep denoting agriculture and commerce. Above the rising sun, signifying the East. Below, aloes indigenous to the Eastern and Border areas of the Cape Province. The crest shows two crossed anchors, symbolic of the seaport, set through a mural (walled) crown.


The supporters are Cape buffalo (Syncerus caffer), once common in the area but now only seen (reintroduced) on game farms and reserves. The buffaloes are a reference to the Buffalo River on which the city stands.
The motto means "By Courage and Faith."

The 1892 arms of East London showed the wheat sheaves and fleeces in gold on a silver field. Heraldry does not permit the placing of gold charges on silver, since there is insufficient contrast, so the field was changed in 1959 to ermine. The 1892 arms did not include crest or supporters, but showed a gold anchor behind the shield in a fashion reminiscent of the arms of Cape Town and the drostdijen of the Cape Colony as granted in 1804 by Commissioner-General Jacob Abraham Uitenhage de Mist.

The Xhosa name iMonti refers to the mouth of the Buffalo River (in Xhosa, Qonce), the derivation being from the Afrikaans mond (mouth). Although the name has been in use more or less since the time of the foundation of the village now called West Bank, it only became an official name of the city in 1994, when Xhosa became an official language of South Africa.

Literature : Information provided by Mike Oettle and taken from http://www.geocities.com/armoria