From Heraldry of the World
Your site history : Eastbourne
Jump to navigation Jump to search 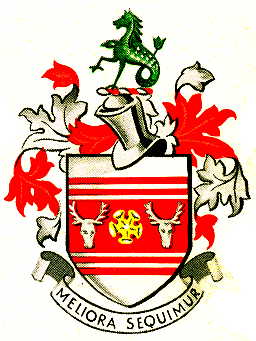 Arms: Argent on a Fesse double cottised Gules a Rose Or between two Stags' Heads caboshed of the field.
Crest: On a Wreath of the Colours a Sea-Horse raising the dexter foot Vert.
Motto: 'MELIORA SEQUIMUR' - We follow the better things.

The sea horse relates to the fact that Eastbourne is a coastal town, and the rest of the embellishments are just decoration.