From Heraldry of the World
Your site history : Eastern Cape
Jump to navigation Jump to search 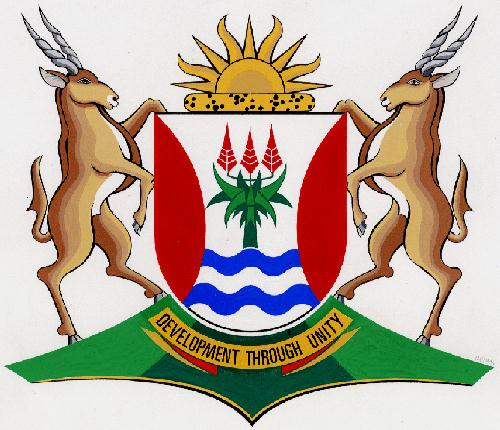 Argent, between flanches Gules, in base bars gemelles wavy Azure and in chief a tree-aloe issuant Vert, with three racemes Gules; the shield ensigned of a leopard-skin headring proper with a semi-sun issuant Or. The supporters are two eland proper and the motto is "Development through Unity".


The arms show as a main charge the Cape Aloe, an indigenous succulent/ cactus plant. Its bitter nectar is used for healing purposes. It symbolises perseverance and strength. The three flowers sprouting from the one stem symbolises unity among the different groups of people in the province.


The red flanks symbolise the soil, the blue waves represent the magnificent coastline of the Eastern Cape.

The crest with The sun refers to the location and pleasant weather of the Eastern Cape. It symbolises the friendliness and positive attitude of its people. It also represents a new era and bright future of growth, development and prosperity.


The rising sun head ring is a symbol for prestige, power and the heritage of the province. The leopard is an animal of strength and is universally considered as a symbol of authority.

The Eland (supporters) was by far the most widespread of all larger antelope in the Eastern Cape and is now reintroduced into the province's nature reserves and game farms. The eland is also important in the folk-lore, especially among the bushmen who almost worshipped it. The bull represents magnificence.