From Heraldry of the World
Your site history : Eastern Counties Building Society
Jump to navigation Jump to search 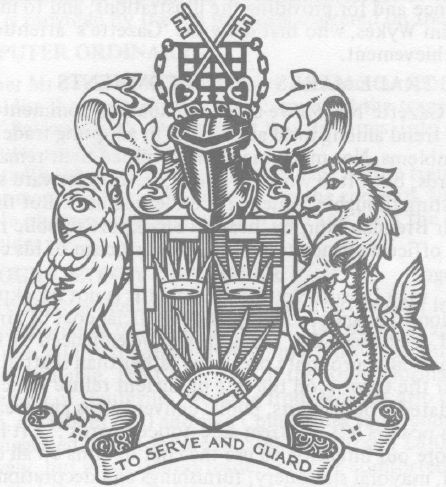 Arms: Per pale gules and azure, in chief two eastern crowns and issuant in base a demi sun in splendour Or, a border embattled argent masoned sable.
Crest: on a wreath Or and gules in front of a portcullis chained sable two keys in saltire the wards upward and outward Or.
Supporters: On the dexter side an owl azure and on the sinister side a seahorse the foreparts argent, the tail proper crined and finned Or.
Motto: To serve and to guard

Most of the symbolism of these arms derives from the Society's territorial associations. The two eastern crowns and the rising sun reflect the name of the Society: mediaeval heralds attributed to the ancient kingdom of East Anglia a field of blue, charged with three crowns. The rising sun also appeared in the arms of the Borough of Lowestoft; the golden tinctures represent riches and prosperity. The division of colours, per pale red and blue, follows that of the arms of the Cinque ports with which Ipswich, home of the Building Society, was closely associated in mediaeval times.

The seahorse as supporter is also derived from the arms of that County Borough of Ipswich. The silver masoned and embattled border refers to the work of a Building Society; the owl is a symbol of wisdom; the portcullis and crossed keys in the crest symbolise saving and security.