From Heraldry of the World
Your site history : Eton College
Jump to navigation Jump to search 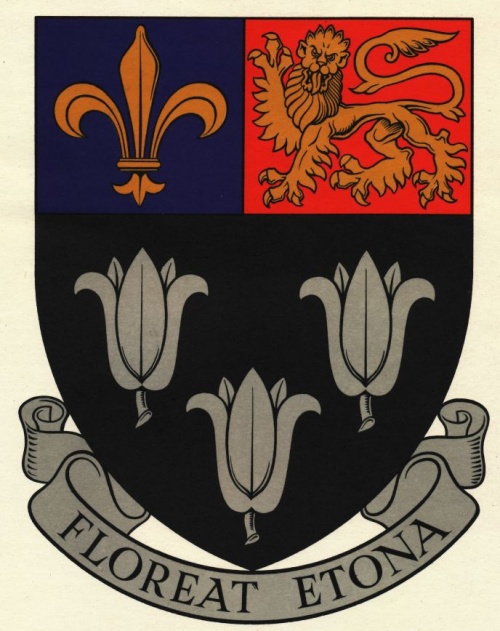 Arms : On a field sable three lily-fowers argent, on the chief of the shield per pale azure with a fower of the French, and gules with a leopard passant or.
Motto: FLOREAT ETONA (May Eton prosper).

Eton College, founded in 1440 by Henry VI, was granted arms by its Founder by Letters Patent, under the Great Seal of England, on the 1st January, 1449. The arms given had been in use for several years previous to the official Grant, and appear on the first Eton seal, used during William of Waynefleet's tenure of the Provostship which began about 1443.

They are almost certainly the oldest school arms in use.

Eton College was dedicated to the Virgin Mary, and the lilies, emblem of purity, were her flower, as well as being symbols of "the brightest flowers redolent of every kind of knowledge". The chief shows the French fleur-de-lys and the English lion, both taken from the Royal Arms.

A common error to be found in many authorities is the description of the lilies as being "slipped", i.e. having stalks, but this is neither in the blazon nor illustration of the Grant.

Another motto, ESTO PERPETUA (Last thou for ever), has also been used, although FLOREAT ETONA is more generally known. ESTO PERPETUA was first used in 1635 on the seal of a letter from the Headmaster, John Harrison, to the Earl of Cork. The motto is not an integral part of the coat of arms, and many schools have used different mottoes at different times in their histories.