From Heraldry of the World
Your site history : Fareham
Jump to navigation Jump to search 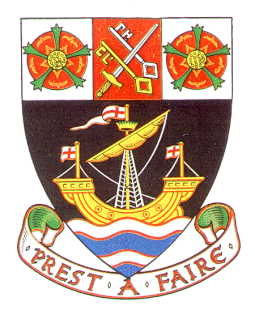 The arms were officially granted on 27 January 1947.

The keys and sword refer to the parish church of SS Peter and Paul.

On either side of the keys is a red rose which is the chief emblem of Hampshire and symbolises the county's former Lancastrian association. The motto is in French and, roughly translated, means 'Ready to act'.