From Heraldry of the World
Your site history : Fassi series
Jump to navigation Jump to search 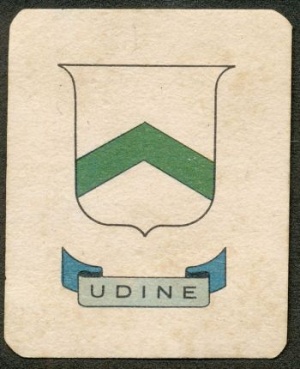 Fassi is a company specialised in cough drops and similar confectionary. The company was founded in 1900 as a 'pharmaceutical institute' and still exists, now with headquarters in Rome.

In the 1920s (?) the company issued a large series of small cards with their product Mental, (now Mental classic), with coats of arms of Italian cities.

I have no idea how many cards were actually issued, as they are not numbered.

The cards have been issued in two series, one with more narrow and one with wider cards. They only differ in the text on the reverse.

The only different card in the series is Zara:

So far I am aware of the following cards in both series: