From Heraldry of the World
Your site history : Fish Hoek
Jump to navigation Jump to search 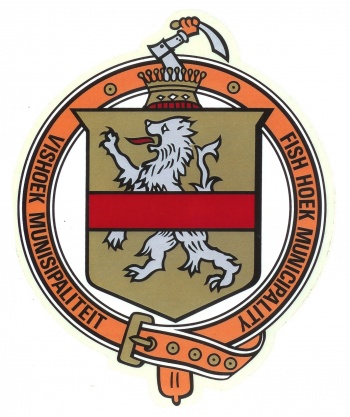 The shield is taken from the Bruins family, to which the land on which the town was eventually laid out was granted by Lord Charles Somerset, and the crest from the De Villiers family which later owned the land.

The arms were agreed on by the newly formed town council in 1941.

It was proposed to obtain a grant from the College of Arms in London. However, in view of the colouring, the heralds wanted nothing to do with the arms. In view of the expenditure already laid out in establishing these arms, it was decided to ignore the College, and to continue using the arms. They remained in use until the municipality’s incorporation into South Peninsula (and since 2000 Cape Town).