From Heraldry of the World
Your site history : Fylde
Jump to navigation Jump to search 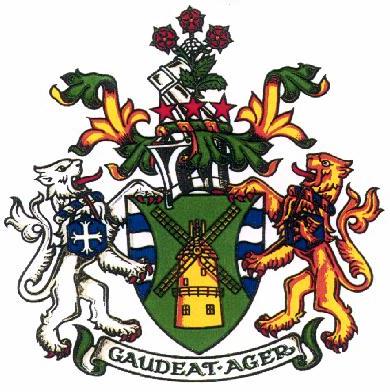 Arms : Vert a representation of a Fylde Windmill Or between two Maunches barry wavy Argent and Azure.
Crest : On a Wreath Or and Vert in front of a dexter Arm in armour embowed proper the hand gauntled also proper and grasping three Roses Gules barbed and seeded and conjoined on one stem with three leaves proper three Mullets Gules.
Supporters : On the dexter a Lion Argent gorged with a Wreath Argent and Azure pendent therefrom a Hexagon Azure charged with a Cross flory Argent and on the sinister a Lion Or gorged with a like Wreath Or and Azure pendent therefrom a Hexagon Azure charged with a Dove volant the dexter wing inverted holding in the beak a Branch of Olive Or.
Motto: 'GAUDEAT AGER' - Let the field be joyful

The shield portrays a typical Fylde windmill in gold on a green background suggested by the gold windmill sails on green in the arms of Fylde R.D.C. This suggests the rural fylde or "field", particularly the area bounded by the Wyre and Ribble, which are symbolised by the six white and blue waves on either side. These appeared in both the Fylde R.D.C. and Lytham St. Annes arms.

The crest is indicative of the union of three Lancashire areas having historical associations with the Clifton family. The arm in armour from their crest was seen in the Fylde R.D.C. crest, and the three red stars from their shield were part of the healdry of Lytham St. Annes and Kirkham. The arm and stars are here combined, and the gauntleted hand grasps a sprig of three red roses on one stalk with three leaves to suggest the union of the three Lancastrian authorities.

The supporters are taken from the arms of Lytham St. Annes and Kirkham. On the left is one of the white lions from the Lytham St. Annes shield, wearing for necessary distinction a crest-wreath of the Borough's liveries, white and blue, from which hangs an hexagonal medallion bearing the white cross on blue which accompanies the lions in the Borough arms. The lions and cross are part of the ecclesiastical heraldry of Durham, the See of which owned the 12th century Priory of Lytham.

The other supporter has also an ecclesiastical origin, being the gold lion of Roger de Montgomery, Earl of Shrewsbury, borne by his Abbey at Shrewsbury, to which the lordship of St. Michael, including Kirkham, was given in the 11th century by Roger de Pioctou, the Lord of Amounderness. The lion also wears a wreath, of the Kirkham colours gold and blue, from which hangs a medallion like the other, bearing the main emblem from Kirkham's arms - the dove and olive branch from the ancient Kirkham borough seal, gold on blue.

For a motto there can be no better choice than the motto of the former Fylde R.D.C. Gaudeat Ager from Psalm 96 : "Let the field (Fylde) be joyful or Let Fylde prosper".

Literature : Image and information provided by the Fylde Council.