From Heraldry of the World
Your site history : Göteborg
Jump to navigation Jump to search 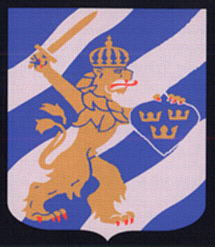 The arms are based on the national arms, showing the lion and wavy bends, as well as the three crowns, but in a different composition. The lion holds a sword, which in the arms is shown pointed backwards. The national symbols as well as the sword indicate that Göteborg was an important border town, as the area south of the city (Halland and Bohuslän) were part of the Danish Kingdom.

There has been a very long debate on two elements of the arms of Göteborg, the position of the lion and the crown. In the national arms the lion is facing right, the normal heraldic position. The arms were first mentioned in 1607 for the old city of Göteborg, and again in 1621 for the new city (which was burned down in between). These documents describe the lion as facing left. The city thus wants the lion to face left, whereas the national heraldic committee wanted the lion to face right. Finally the city won the debate, which means that in the official image, as shown above, the lion is facing left (remember that in heraldry the shield is read from behind, heraldic left is right to the viewer). At the same time a right-facing lion is used in military banners and symbols, which has been the case for several centuries...

The second point of debate is the crown. In historical documents and images the lion bears a normal crown, with three golden leaves, as in the national arms. On special request of the city the crown was changed to a Royal crown, to indicate the importance of the city, which historically used a royal crown on the shield, instead of the more common mural crown. Since crowns are no longer used on Swedish city arms, the city wanted to have the royal crown for the lion, instead of the more common crown.