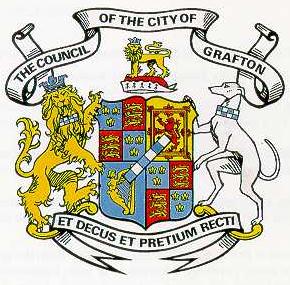 The arms are a link with an English Dukedom. In July 1923 the ninth Duke of Grafton, John Charles William Fitzroy endowed the City with the right to use the escutcheon as it Coat of Arms adopting his heraldic device and was formally adopted in September 1923.

The Duke of Grafton Arms are derived from the The Royal Arms of Charles II, namely:
Quarterly: 1st and 4th, France & England quarterly, 2nd Scotland, 3rd Ireland: the whole debruised by a baton sinister, compony of six pieces, argent and azure.
Crest: On a chapeau gules, turned up ermine, a lion statant guardant or, ducally crowned azure, and gorged with a collar counter compony argent and azure.

The Latin Motto which appears on the crest of the crest of the Dukedom "Et Decus Et Pretium Recti" is also the motto of Grafton. It means "The Honour and Recompense of Virtue" and literally means "Both the glory and rewards of right", or more correctly, "Rectitude is both honorable and precious".