From Heraldry of the World
Your site history : Greater Manchester
Jump to navigation Jump to search

Created in 1974 from parts of Cheshire, Lancashire and Yorkshire - West Riding
Abolished as an independent council in 1986, but still seen as a metropolitan county 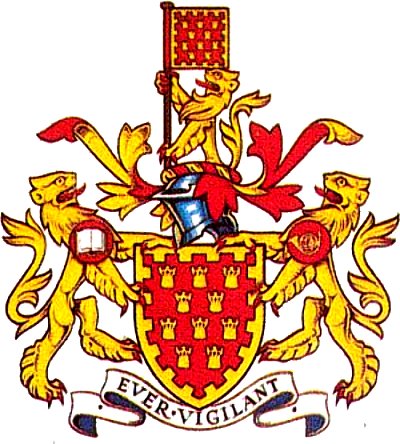 Arms : Gules ten Towers three two three two all within a Bordure embattled Or.
Crest : On a Wreath of the Colours a demi Lion Or supporting a Staff proper flying therefrom a Banner of the Arms.
Supporters : On either side a lion Or each surmounted on the shoulder by a Roundel Gules that to the dexter charged with an open Book and that to the sinister charged with a French Horn proper.
Motto: 'EVER VIGILANT'

The shield shows ten gold towers on a red field. These represent the ten Cities and Boroughs in the new County. The design is completed by an embattled bordure also in gold, to show all ten districts are contained in the county.

The crest is simply an English lion holding a banner of the Arms.

The supporters are also English lions. They are differenced by red roundels, one bearing a French horn, representing music and culture; the other an open book for learning and education.