From Heraldry of the World
Your site history : Grums
Jump to navigation Jump to search 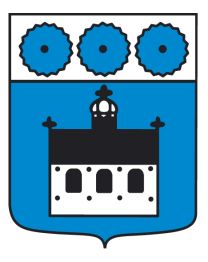 The small church is derived from the oldest known seal of the district, known from 1617. The image showed a accurate image of the local church. When the Grums council applied for arms in 1952 they requested that the church would be the major element in the new arms. As modern symbols for the forestry industry in the town, a chief with three saw-blades was added.