From Heraldry of the World
Your site history : Halton (England)
Jump to navigation Jump to search 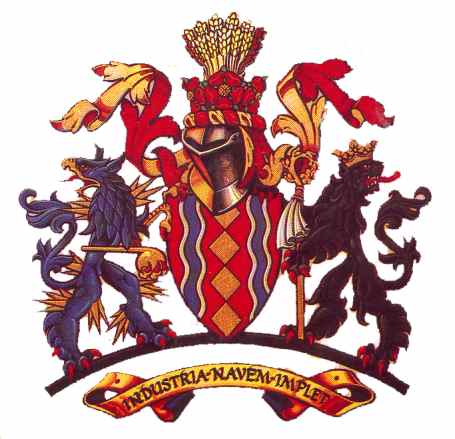 Arms : Gules four Lozenges conjoined in pale Or between two Pallets wavy Azure fimbriated Argent.
Crest : On a Wreath Or and Gules four Roses set in square Gules barbed and seeded proper and standing within the same a Garb gold.
Supporters : On the dexter side a Male Griffin reguardant azure beaked rayed and the forelegs Or langued and clawed Gules holding fesswise in the dexter claw an Alembic Gold and on the sinister side a Lion reguardant Sable armed Gules crowned Or supporting by the sinister paw an Abbatial Crozier with Sudarium proper all upon a Compartment comprising a Segment of Steel proper.
Motto: 'INDUSTRIA NAVEM IMPLET' - Industry fills the ships.

The arms were officially granted on October 6, 1983.

The arms of William Fitznigel,one of the Norman Barons of Halton, provided the initial inspiration for the escutcheon: his personal coat of arms displayed golden lozenges on a field of red. The pallets wavy symbolize the Borough's waterways, and also brine which is an important raw ingredient in the chemical industry.

The crest shows on a helmet, a gold and red wreath supports a circlet of red Lancashire roses; this encircles a golden wheatsheaf which provides a link with the arms of the county of Cheshire. Red and gold mantling, on both sides of the helmet, complete the crest.

The aupporters are a blue male griffin, which has connections with a local legend concerning the Bold family which once had strong associations with Farnworth Parish Church. The golden rays, emanating from the griffin's body, refer to the dynamism of the district and the continual efforts to increase the industrial prosperity and well-being of the Borough's citizens. The golden alembic refers to the chemical industry; a similar device appeared on the Widnes coat of arms. The supporter on the sinister side is a black lion, this is taken from the arms of the Savage family which was once an important landowner in Weston. The lion's crown is a reminder of the local links with the monarchy through the Duchy of Lancaster and Halton Castle. The abbot's crozier reminds us of Norton Abbey which played an important role in the district until the dissolution. Both supporters look backwards over their shoulders in a vigilant manner, this underlines the need for the Borough Council to be alert in promoting the economic and social welfare of its citizens. The whole rests upon an arc of black steel, this symbolises the Runcorn-Widnes bridge, which links the twin towns, and provides the area with its most significant landmark.