From Heraldry of the World
Your site history : Hammersmith and Fulham
Jump to navigation Jump to search 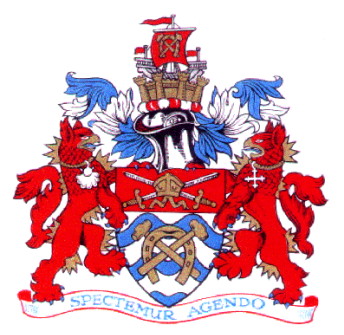 Arms : Barry wavy Argent and Azure two Hammers in saltire interlaced with a Horseshoe Or on a Chief Gules two Swords in saltire proper hilts and pomels Or a Mitre of the last.
Crest : On a Wreath Argent and Sanguine out of a Mural Crown of six Turrets Or an ancient Ship oars in action Sable sail set flags and pennon flying Sanguine the sail charged with two Hammers in saltire interlaced with a Horseshoe Or; Mantled Azure doubled Argent.
Supporters : On each side a Male Griffin Gules beaked and irradiated Or armed and langued Azure each gorged with a Cord Or pendent from that of the dexter an Escallop and from that of the sinister a Cross Crosslet Argent.
Motto: 'SPECTEMUR AGENDO' - Let us be judged by our actions

The lower part of the shield represents Hammersmith. The crossed hammers suggest the town's name while the silver and blue barry wavy field is for the river Thames. The horseshoe comes from the arms of sir Nicholas Crisp.

The chief is for Fulham. The devices - crossed swords and a mitre - are for the See of London, ancient holders of the manor of Fulham.

The crest wreath is in silver and sanguine. This is a colour rarely found in grants of arms. It probably recalls the shield of Hammersmith which though blazoned as gules showed a deep pink colour in official representations. Thus the torse wreath recalls the old Borough of Hammersmith and the blue and white mantling the livery of Fulham.

The crest has a turreted crown is a form of civic mural crown. From it rises a ship representing the Danish landing at Fulham in AD 879. The sanguine sail bears the hammers and horseshoe of the arms.

The griffin supporters are said to represent dynamism. They are differenced by an escallop from the Pring family arms and a cross-crosslet from those of the Latymers.

The motto is a that of Hammersmith.