From Heraldry of the World
Your site history : Hampshire
Jump to navigation Jump to search 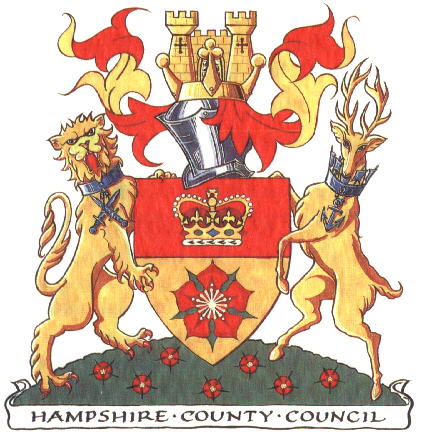 Arms : Per fess Gules and Or in chief a Royal Crown proper and in base a Rose Gules barbed and seeded proper.
Crest : Within a Saxon Crown a twin-towered Castle Or, Mantled Gules doubled Or.
Supporters : Standing upon a grassy Compartment Vert semy of Roses Gules barbed and seeded proper on the dexter side a Lion rampant guardant Or gorged with a Collar and pendant therefrom by a chain a pair of Swords in saltire points uppermost Azure and on the sinister side a Stag also rampant guardant Or gorged with a Naval Crown pendant therefrom by a chain an Anchor proper.

The rose is the Lancaster rose, which has been used by Hampshire for many centuries. Why the rose was adopted is not certain. One account holds that the rose was granted by King Henry V after the battle of Agincourt. Another theory traces the rose to Edmund, Earl of Lancaster, brother of King Edward I and he also had many estates in Hampshire. When the Duchy of Lancaster was joined to the crown in 1399 the crown was added to the rose. These theories, however, are not proven. The oldest reference of a crown and rose date from 1681 in Stockbridge.

The lion supporter symbolises the fact that the city of Winchester was the Medieval capital of England, and the lion thus is the English lion. The two crossed swords are a symbol for the connection of Hampshire with the army.

The stag represents the New Forest, the royal hunting ground created by William the Conqueror in the 11th century. The anchor symbolises the connection with the navy.

The crest shows a Saxon crown and castle and symbolises the links with the Saxon Kingdom of Wessex, of which Winchester was the capital. The castle also symbolises the role of Hampshire in defending the country.

Literature : Leaflet published by and send to me by the Hampshire county council.