From Heraldry of the World
Your site history : Herefordshire
Jump to navigation Jump to search 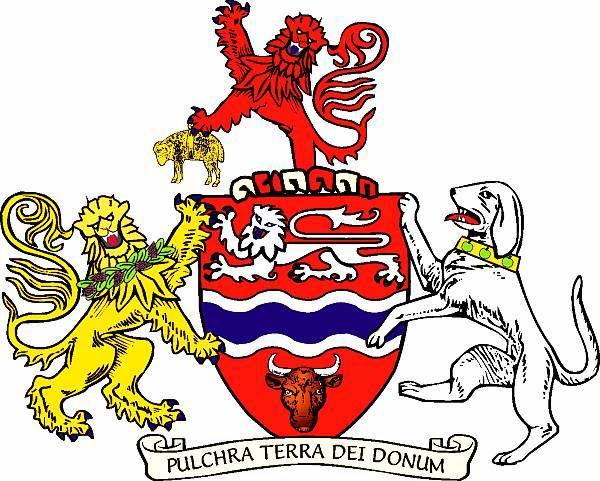 Arms : Gules on a Fesse wavy between in chief a Lion passant guardant Argent and in base a Herefordshire Bull's Head caboshed proper a Bar wavy Azure.
Crest : On a Wreath of the Colours a demi Lion rampant Gules holding in the sinister claw a Fleece Or.
Supporters : On the dexter side a Lion guardant Or gorged with a Wreath of Hops fructed proper and on the sinister a Talbot Argent gorged with a Collar Or charged with three Apples proper.
Motto : 'PULCHRA TERRA DEI DONUM' - This fair land is the gift of God.

The arms were officially granted on February 28, 1946 to the Herefordshire County Council and re-adopted in 1998 by the new County of Herefordshire District Council.

The crest is based on the arms of the Borough of Leominster, which feature a rampant lion holding a lamb and is a reference to the importance of agriculture to the county.

The gold Lion is that of England, differenced by a garland of hops around his neck. The talbot is taken from the arms of the Talbot family, Marcher Lords of Shrewsbury and Viscounts of Hereford. For difference he wears a gold collar charged with apples, an important product of the county.