From Heraldry of the World
Your site history : Heywood
Jump to navigation Jump to search 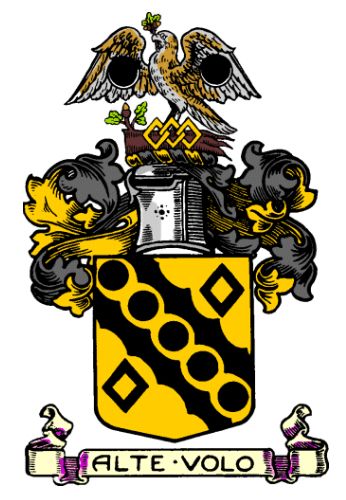 Arms : Or five Pellets between two Bendlets engrailed the whole between as many Mascles Sable.
Crest : On a Wreath of the Colours in front of the Trunk of a Tree eradicated fessewise and sprouting to the dexter a Falcon rising proper each wing charged with a Pellet and holding in the beak a Sprig of Oak also proper three Mascles interlaced Or.
Motto: 'ALTE VOLO' - I fly high.

The arms and crest are based on those of the Heywood family, who bore Argent three Roundels between two Bendlets al Gules and for the crest a Falcon rising from a Tree Trunk proper. The change of colours to gold and black was perhaps intended to represent the iron and coal industries.