From Heraldry of the World
Your site history : High Peak
Jump to navigation Jump to search 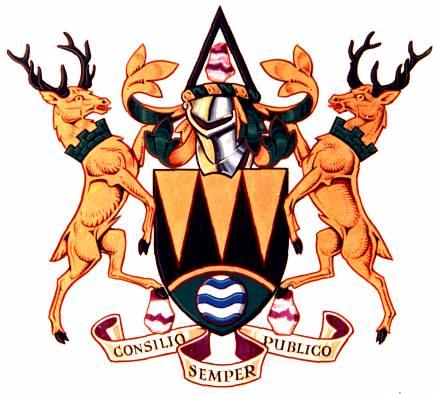 Arms : Sable three Piles Or on a Base enarched Vert fimbrated Or a Fountain.
Crest : On a Wreath Or and Vert a Piece of Blue John Stone proper within a Chevron Sable.
Supporters : On either side a Stag Or attired and unguled Sable gorged with a Mural Crown Vert and resting the interior hind leg on a Piece of Blue John Stone proper.
Motto: 'CONSILIO SEMPER PUBLICO' - Ever in the public interest

The arms were officially granted on 1976.

The design is based on two major premises. The first is that it should symbolise the whole new district and not try to include bits and pieces from all the obsolete constituent authorities. The second is that it should be dignified, simple, symmetrical, memorable, relatively economic to reproduce in colour and capable of reduction without great loss of detail. The black points represent the high peaks in the north of the district, whilst the green base symbolises the green lowlands and the heraldic fountain refers to the lakes and reservoirs and natural mineral springs. The symbols suggest the topography of the district - rather than any particular occupations, trades or industries.

The crest continues the peak motif of the arms, but here this is a single peak at the highest point in the achievement of arms, being a specific reference to the name of the district. In a cave within the peak is a piece of Blue John, the stone being a special feature of the district and known throughout the world.

The supporters are stags or bucks which are found everywhere in the heraldry of the entire district. The stags represent the Cavendish stag, the stag of Downes, Lords of the Manor of Whaley Bridge, the buck of Buxton, and the stags which once roamed over the whole area.