From Heraldry of the World
Your site history : Camberwell > Bermondsey > Holborn
Jump to navigation Jump to search 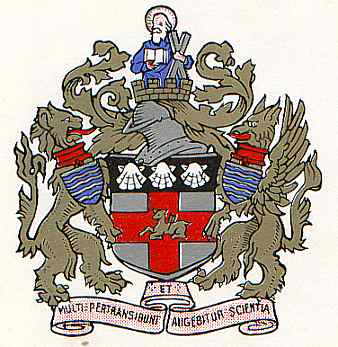 Arms: Argent a Cross Gules charged in the centre point with a Hind pierced by an Arrow Or and on a Chief Sable three Escallops of the field.
Crest: Out of a Mural Crown proper a demi Figure representing St. Andrew the Apostle vested Azure holding in the dexter hand an open Boook also proper and supporting on his sinister arm a Saltire Azure.
Supporters: On the dexter a Lion and in the sinister a Gryphon both Or each gorged with a Collar Gules suspended therefrom an Escutcheon barry wavy of ten Argent and Azure.
Motto: 'MULTI PERTRANSIBUNT ET AUGEBITUR SCIENTIA'-Many shall pass through and learning shall be increased

The red cross stands for the churches of St. Gerorge the Martyr and St. George Bloomsbury; the figure of St. Andrew for the parish so dedicated; and the wounded hind for St. Giles in the Fields, in allusion to the legend that Giles received the injury which crippled him while saving a hind from the hunters.. The scallop shells are from the arms of the Russells, Dukes of Bedford, who palyed a mojor role in the history of the borough. The supporters denote the two inns of court in the borough, the lion derived from the Lincoln's Inn, the griffin from the Gray's Inn. The motto also refers to the Inns.