From Heraldry of the World
Your site history : Horwich
Jump to navigation Jump to search 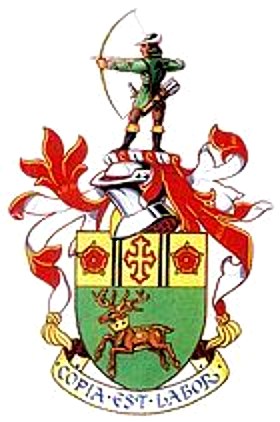 Arms : Vert a Hart courant proper gorged with an Ancient Crown on a Chief or a Cross Flory Gules voided of the Chief between four Pallets two and two Sable all between two Roses Gules barbed and seeded proper.
Crest : On a Wreath Argent and Gules a Huntsman habited and drawing his bow all proper.
Motto: Copia est Labor

The arms were officially granted on 1st September 1975.

Horwich UDC never had official arms, but the Horwich Town Council adopted arms after the merger with Bolton.

The arms show a deer and huntsman - reminders of Horwich as a Royal hunting forest in the middle ages, two red Lancashire roses separated by a pair of black railway lines depicting the railway industry of Horwich and the Cross of the Pilkington family. Bishop Pilkington was a founder of the nearby Rivington Grammar School.