From Heraldry of the World
Your site history : IV Bomber Command, USAAF
Jump to navigation Jump to search

History: Constituted as IV Bomber Command on 4 September 1941 and activated on 19 September. Assigned to Fourth Air Force. Trained bombardment organizations and personnel. Also flew patrols along the US West Coast. Disbanded on 31 March 1944. 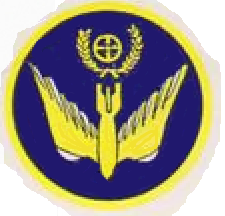 Insigne: On a blue disc with a yellow border, a winged aerial bomb, nose down, beneath an olive caplet inclosing a bomb sight, all yellow.

The Insigne was approved on 4 December 1941.