From Heraldry of the World
Your site history : I Fighter Command, USAAF
Jump to navigation Jump to search

History: Constituted as I Interceptor Command on 26 May 1941 and activated on 5 June 1941. Redesignated I Fighter Command in May 1942. Provided Air Defence for the East Coast of the USA, until August 1944, then trained Fighter Organizations and Personnel. Inactivated on 21 March 1946 and Disbanded on 8 October 1948. 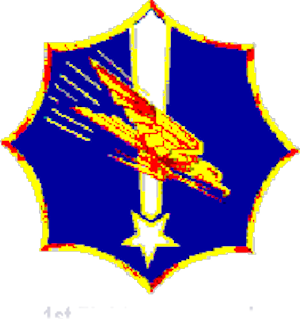 Insigne: Ona geometrical figure formed by an ocatagon with invected sides azure, border gold, a pile argent debruised at base point by a mullet of the last anbd surmounted by a stylized falcon grasping two lightning bolts in claws , driving bendwise and emitting speed lines, all or.