From Heraldry of the World
Your site history : Ilkeston
Jump to navigation Jump to search 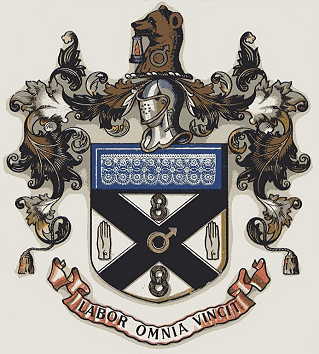 Arms : Argent on a Saltire Sable between two Cotton Hanks in pale and as many sinister Gloves in fesse proper the astronomical Sign of Mars Or on a Chief Azure a representation of a Piece of Maltese Lace fessewise Argent.
Crest : On a Wreath of the Colours a Bear's Head couped proper charged on the neck with the astronomical Sign of Mars Sable suspended from the mouth a Safety-Lamp proper.
Motto: 'LABOR OMNIA VINCIT' - Labour overcomes all things

The emblems all refer to local industries, the symbol of Mars standing for iron.