From Heraldry of the World
Your site history : Innerleithen, Traquair and Glen
Jump to navigation Jump to search 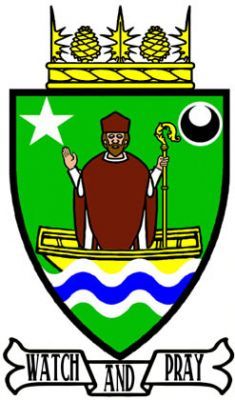 Vert, issuant from a bar wavy Argent in base charged with a barrulet also wavy Azure, a boat Or, therein standing the figure of Saint Ronan, vested and mitred all Proper, holding in his dexter hand a crozier of the Fourth, in dexter chief a mullet Argent and in sinister chief a plate charged with a crescent Sable.

Above the Shield is placed a Coronet appropriate to a statutory Community Council, videlicet:- a circlet richly chased from which are issuant four thistle leaves (one and two halves visible) and four pine cones (two visible) Or, and in an Escrol below the same this Motto "Watch and Pray".

The arms are based on the arms of Innerleithen Burgh, with the addition of symbols for the other villages. The silver mullet comes from the arms of Stuart of Traquair and the black crescent from those of Glenconner of Glen.