From Heraldry of the World
Your site history : Inverness
Jump to navigation Jump to search 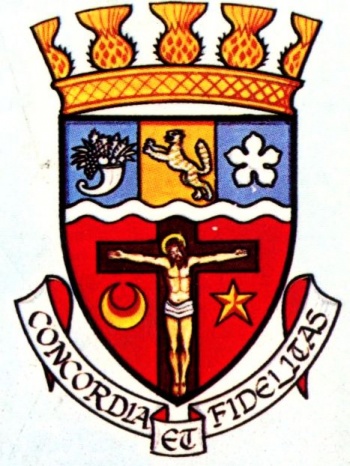 Per fess enhanced Azure and Gules, a barrulet wavy enhanced Argent; in base Our Lord upon the Cross Proper between a crescent and a mullet Or, and in chief between dexter, a cornucopia, and sinister, a fraise Argent, on a pale Or a cat saliant Proper.

Above the Shield is placed a coronet appropriate to a statutory District, videlicet:- a circlet richly chased, from which are issuant eight thistle-heads (three and two halves visible) Or; and in an Escrol under the Shield this Motto Concordia et Fidelitas .

The arms show in the base the arms of Inverness Burgh, see below, Jezus on the Cross. The gold crescent and star are added, as these are historically often added to arms showing Saints.

The cinqefoil is taken as a symbol for Aird district. The wavy bar represents the Beauly and Ness rivers. 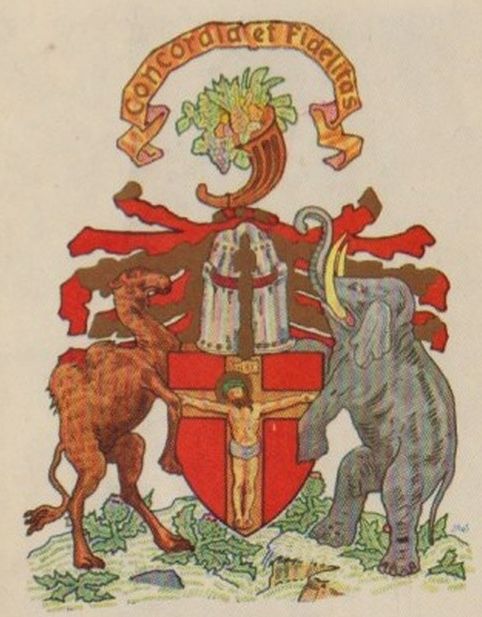 Gules, Our Lord upon the Cross Proper.

Above the Shield is placed a suitable Helmet with a Mantling Gules doub­ led Or, and upon a Wreath of their proper Liveries is set for Crest a cornucopia Proper, and in an Escrol over the same this Motto "Concordia et Fidelitas", and upon a Compart­ ment below the Shield are placed for Supporters, on the dexter side a dromedary and on the sinister side an elephant, both Proper.

Inverness appears to have been made a Royal Burgh by King David I some time between 1130 and 1153.

The arms are based on the obverse of the oldest known Burgh seal of which a 1439 impression is on record. The oldest known representation of the Burgh arms appears on a panel painted in the reign of King Charles I, and now preserved in the Town House, which shows "Gules, a camel statant contournee Or" with two elephants as supporters and crest and motto as in the present arms.

Nevertheless, in 1685, James Smith, Master Mason, Edinburgh, was instructed to carve the town's arms on the new Ness Bridge, such arms to show "Our Saviour on the Cross, supported by a dromedary on the dexter and an elephant on the sinister". It is not known why such a change was decided upon, but it is known that in the following year an effort was made to alter the instructions so that the carving would show "a dromedary supported by two ele­phants". By that time, however, Smith had completed his work (incidentally, showing the supporters as statant) and he naturally demanded an extra fee for a new carving. This the Town Council was unwilling to pay, and so the stone with the incorrect arms was allowed to remain.

When, some two hundred years later, it was decided to matriculate the arms, the crucifix design was so well-established that no amount of persuasion from Lord Lyon Balfour Paul or other authorities could persuade the Council to revert to the blazon shown on the Charles I panel. James Smith's carving, which had been preserved when the Ness Bridge was destroyed by flood in 1849, and had later been built into the Castle Wynd gable of the Town House, had come to be regarded as authoritative.

The meaning of the arms is not wholly clear. The representation of Our Lord on the Cross probably refers to the important side altar of The Holy Cross in the pre­ Reformation parish church which was dedicated to the Virgin Mary, but the elephant and the camel have never been satisfactorily explained though they may refer to the considerable trade Inverness carried on with the East in medieval times; the legend that they were granted to the town by King William the Lion (1165-1214) is certainly groundless as the use of supporters in Scots heraldry cannot be traced further back than the end of the thirteenth century.

The cornucopia crest is also probably symbolic of the Burgh's trade and prosperity, while the Latin motto­ "Concord and Fidelity" is a noble sentiment worthy of a Burgh which is capital of the Highlands.

In January 2008 a petition to matriculate armorial bearings for the City of Inverness was refused by Lord Lyon King of Arms on the grounds that there is no legal entity to which arms can be granted.