From Heraldry of the World
Your site history : Jarrow
Jump to navigation Jump to search 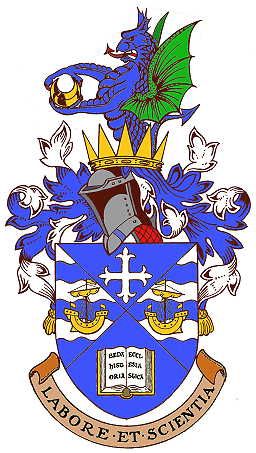 Arms : Per saltire Azure and barry wavy of six Argent and of the first in chief a Cross flory of the second in fess two Lymphads sails furled Or and in base an open Book also of the second edged and clasped Gold and inscribed with the words "Beda Historia Ecclesiastica" Sable.
Crest : Issuant from an Antique Crown Or a demi Dragon Azure winged Vert holding between the claws a Crescent Gold.
Motto: 'LABORE ET SCIENTIA' - By labour and science

The arms were officially granted on March 3, 1930.

The cross represents the monastery founded in 681 by Benedict Biscop and endowed with lands by King Egfrid. It was here the Venerable Bede wrote his famous book, repre­sented in the shield. He was buried in the monastery, but his body was removed to Durham by Edward the Confessor. The ships refer to the port and shipbuilding.

The crest is based upon that of Sir Charles Mark Palmer, through whose great industrial enterprises Jarrow rose from a mere village to its present importance.

Before 1930 the borough used other unofficial arms, see below :