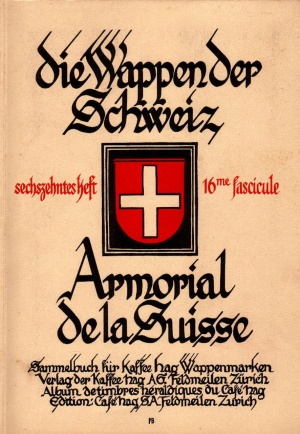 The Swiss Coffee Hag series are the most complicated series of all the Coffee Hag albums. The Swiss albums were actually the first to be issued, as early as 1910 and were reprinted many times until the mid 1960s. This has resulted in a series of at least 76 different albums and more than 2500 variations in images. In total the number of stamps issued for the Swiss series is more than for all other series combined !

The series were started in 1911 with the first album with Kantons und Stadtwappen (arms of Cantons and cities), numbered 1-80. This album was printed at three different locations (München, Laupen and an unmarked issue) with the same images, but the stamps differed slightly in design. The 2nd album with arms of towns and villages (Stadt-und Dorfgemeinden, numbered 81-144) was also issued at the same time and same locations. The third album (images 145-288) was issued only at two locations in 1922. In 1923 the fourth album, named Stadt-und Dorfgemeinden (Serie C) was issued, and the numbering was started again with 1-48.

The series was then discontinued in the same style and redesigned. In 1926 the new series were started, in which not only town arms, but also personal and other arms were planned. The series started again with album 4, which has the same towns as the old series number 4, but now in a different design of album and images. Later albums 5-18 were issued in more or less the same style. Albums 4 and 5 were later combined to album 4/5, which, in a later issue, was again renamed album 5. In the 1950s the lay-out was changed again, and all albums (5-18) were issued with the new design, and an album 19 was added. Before WWII also two albums with arms of monasteries, dioceses and othe religious arms were issued as numbers 1 and 2. An album 3 was never issued in the new series.

To complicate matters, the albums were also continously revised. Arms were changed and updated due to recent grants, and the number of inhabitants was adjusted. In a few cases towns were replaced by other towns. This all has resulted in the (at least) 76 different albums.

The arms were also often restyled and the towns and cantons of the old albums 1-3 were re-issued in the new series. Some arms thus have been published in more than 5 variations ! An example is shown below for Altstätten (the upper row shows the arms from the old series, the lower row from the new series in different design. In the last image the bear no longer has red claws):

Some differences in style of the back of the images (later issues have no longer any information on the back)are shown below. More than 5 styles are known, but not for each town all styles have been issued. Some examples are shown below:

The albums were issued with the following front types :

The table below shows the different albums that have been issued. The albums can be distinguished in most cases by the advertisement on the back, with the exception of the old series, and in the new series with type 4 fronts. Sometimes different editions had the same back, these albums can only be distinguished based on the texts.

The albums are numbered with an extra letter (A-F). These letters are based on the time the album was approximately issued. Hence of the early albums most letters exist, but form album 19 only the letters E and F exist.

Besides the albums listed below, there have been albums issued with misprints and in hardcover. These are not listed here.

The albums of the old series :

The albums of the newseries :

An overview of all albums can be found here as an excel file.

During the years many promotion leaflets and notifications were issued. A few can be downloaded here:

Ordering the images was through an ordering form: