From Heraldry of the World
(Redirected from Kaffee Hag albums) 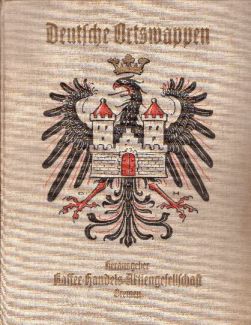 The history of the German issues of the Kaffee Hag albums is complicated, due to two wars and the changes in the political situation in Germany.

Although both series supposedly would contain around 3000 stamps, only 703 and around 2820 were actually published (not counting the numerous reprints and variations).

The first series was issued between 1913 and 1916 as Die Deutsche Ortswappen, but this name does not appear on the albums itself. The albums were issued as albums, not as loose pages as in the second series. Each album dealt with one or more Prussian provinces or other States. The albums were reprinted several times, there were 6 albums and 12 different editions:

The following albums were printed: 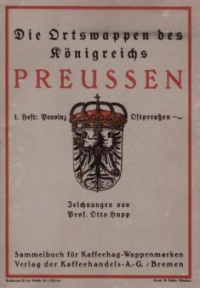 Contains numbers 1-69 with coats of arms of Ostpreussen (now mainly Poland and Russia).

The first edition contains three additional texts; one preface by the Brücke association, one about the Brücke and Kaffee Hag and one with 5 press references to the arms. The Brücke was an organisation that, among other things, promoted the use of advertising and the owner of the Kaffee Hag Company (Roselius) was one of the first to issue stamps in the uniform size system promoted by Die Brücke.

The second edition only contains a text about advertising as a means to spread culture as well as 4 press references.

The third and fourth editions contain three texts by Prof. Hupp on heraldry, general remarks and the history of the arms of Ostpreussen. The sequence of the images in these last editions has also changed; in the first two editions the towns in Regierungsbezirk (district) Allenstein were placed among the two other districts, in the third edition the district was placed after the other two districts.

The first edition has three texts; one on the stamps of Kaffee Hag, and two about different aspects of coffee.

The second edition has the additional stamp and two texts from Prof. Hupp, on the sources of the arms and on the history of the arms of Westpreussen. 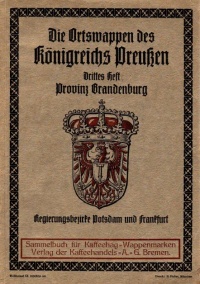 Both issues contain two texts on the history of the arms.

Both issues are identical and contain 3 texts frorm Prof. Hupp on the history of the arms. 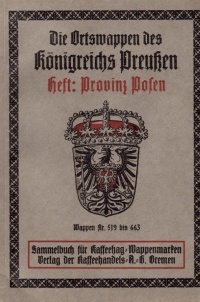 Also contains two additional texts, one on the heraldic language, and the other on the history of the arms. Although there is officially only one edition, there are differences in the back page, indicating at least two different prints of this edition.

Has one additional text on the history of the arms.

According to the texts on the back of the stamps a total of 3000 arms were planned.

It is not known how many stamps were actually issued, but a number of 68 million has been mentioned.

The stamps are marked with the initials of the author, OH, for Prof. Otto Hupp. The initials are printed in black, with the exception of numbers 192-223 that show either initials in blue, or no initials at all.

There are 6 variations of the arms known (Liebenwalde, Strasburg, Hengersberg, Wollin, Jaratschewo, Jarotschin), as well as several small changes on the decorations, the letters and the texts on the back.

All books were published by B. Heller in München.

The books were not for sale in the bookshops, but had to be ordered at Kaffee Hag in Bremen in exchange for a number of stamps. Stamps were packed in the pre-packed coffee sold all over the country.

The stamps were issued in sheets of 32 (8x4) stamps, see image below. 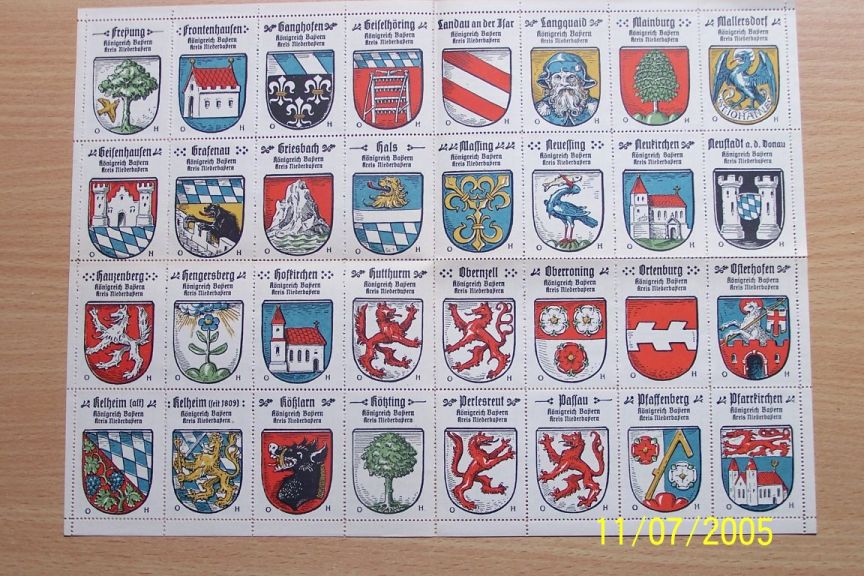 The new (second) series was published as Deutsche Ortswappen (Neue Reihe) between 1927 and 1938. There are several differences as compared with the old series issued between 1913-1918. 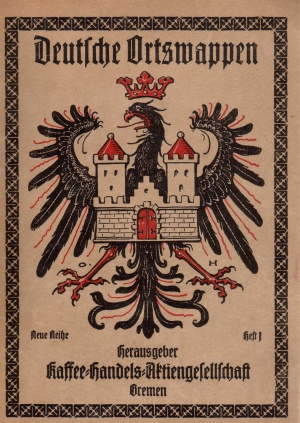 The albums were issued as loose sheets, which could be bound in either 10 small albums, or in four large albums. Each page contained 9 arms. The content of the 10 albums was described, still people often filled the albums at random or by State, which means that each album may contain different pages.

The four large albums were not numbered and could be used at will.

The arms were published by province/State, but the images of the different provinces were not issued at the same time, some parts were issued years after the first half of the series.

Like in the old series the back of the arms contained the description and some advertising. The stamps were issued in sheets of 18.

There are many variations in the new series known. As the images and the sheets often needed to be reprinted, small corrections were made and mistakes were corrected. There are at least 75 different images known, which are not listed in the Additions and Corrections section. Besides this, there are hundreds of texts variations known (both in albums and on the stamps), such as changes in the number of inhabitants, changed descriptions of the arms, changed status (town, city, village) and many more.

An example of a variation is Neumünster

The arms of the following States and provinces were issued :

For an overview of all images (over 5000) issued see here.