From Heraldry of the World
Your site history : Kaunas (county)
Jump to navigation Jump to search 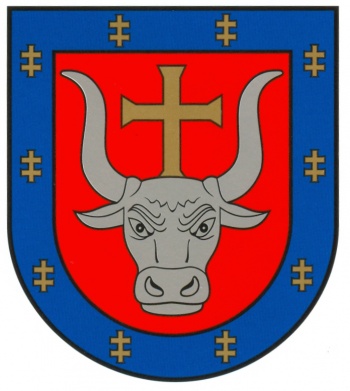 The early origin of Kaunas county shall be considered the Kaunas district (pavietas), established in 1564-1566 in the Trakai province. The seal of land court was allowed for the district, showing the National Arms. In the 18th century the actuary's personal arms was shown under the National Arms.

During the first years of rule of Russian Empire, the Russian eagle was shown in the upper part, and the Lithuanian knigth was shown in the lower part. This symbolics was used till the uprising in 1831.

In 1842 the new Kaunas province (governorate) was established by joining some lands of earlier Vilnius province.

The first project of its arms showed the obelisk in the castle yard, the Lithuanian knigth and the Samogitian bear, also the confluence of Nemunas and Neris rivers. However the granted arms lost the historic symbols, and only the Russian imperial and Orthodox symbols were left. The prototype of obelisk was the copy of monument of Borodino battle, opened in Kaunas in 1843.

The design of arms was slightly improved in 1878.

In 1994 the Kaunas county was re-established.